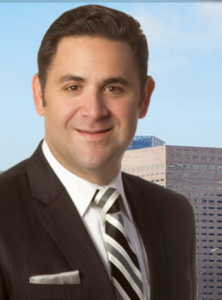 Michael D. Leader has had a somewhat unique background and history with experience that assists him in his practice, that goes well beyond his legal career.  As a result, Michael has a very unique practice focusing his time on the areas he enjoys the most and has excelled at throughout his career.  Mr. Leader believes in striving to always be amongst the best at what he does.

Michael was exposed to the legal profession at a young age as his father and role model, George N. Leader, was a well-established attorney in Miami since 1951.  Mr. Leader worked during his formative years in his father’s office learning business, law and a great deal about the healthcare and insurance industry.  Michael received a full academic scholarship to law school during which he spent a great deal of time working as a law clerk. Mr. Leader was given the opportunity to do almost everything short of taking depositions and appearing in court while in law school.  During his time as a law clerk, he learned a great deal about the civil litigation world, especially as it relates to healthcare, insurance and insurance bad faith.

Mr. Leader started his career as an attorney in the courtroom as an Assistant State Attorney in Broward County, Florida where he was responsible for thousands of files over his time with the office.  He supervised and trained other lawyers and often provided instruction to police officers on various legal issues.  While working in the Felony Trial Unit, he was recruited from the State Attorney’s Office by a highly prominent DUI Defense firm where he successfully defended most of the firm’s clients in Dade and Monroe Counties.  Although Michael had other opportunities, it was his priority to hone his trial and courtroom skills in order to strive to be amongst the best at what he did in any area of litigation.

A well-known insurance defense firm reached out to Mr. Leader to come back to work with them as an attorney, having been a law clerk with the firm years prior (and after a name change).  Mr. Leader’s unique background and experience in the healthcare and nursing home industry, coupled with his courtroom and trial skills, made him a perfect candidate to represent national healthcare conglomerates, smaller facilities and individual doctors in Medical Malpractice and other forms of healthcare negligence claims.  During his time with the insurance defense firm, Mr. Leader also worked on numerous general liability claims, including but not limited to auto and slip and falls.  It was also during this time period that Mr. Leader was sought out to represent Plaintiffs in commercial litigation, civil theft, and deceptive and unfair trade practice claims.  Additionally, Mr. Leader dealt directly and indirectly with insurance bad faith issues, insurance based litigation and the firm was retained by insurance companies for most of its cases.  During his tenure at the firm, Mr. Leader battled with some of the finest and best known litigators in the State and further sharpened his pre-suit, discovery, deposition and general litigation skills.  Also noteworthy, having grown up in the healthcare arena, Mr. Leader became licensed as a Nursing Home Administrator, a license he kept active for approximately fifteen years until recently allowing it to go into inactive status.

Mr. Leader left the insurance defense firm with three other skilled and able attorneys to start the firm of Fann & Petruccelli, P.A.  As a founding partner of the firm, Mr. Leader was responsible for various administrative and managerial aspects of its Fort Lauderdale and Tampa offices.  In addition he continued to handle and supervise all aspects of litigation from pre-suit through trial of complex litigation in the areas of healthcare litigation, insurance defense, medical malpractice, nursing home negligence/Chapter 400 claims, commercial litigation, auto liability, personal injury protection, slip and fall and criminal related matters.  Mr. Leader managed and balanced needs of extremely high case load (responsible for more than sixty-five files at a given time).  During that time, Mr. Leader began developing a focus on first party insurance litigation which has been part of his practice ever since.

Due to the needs of some of his current clients, his desire to refocus his attention to representing Plaintiffs that were unfairly treated by their insurance carriers, criminal defense and the other civil areas he continually excelled at, and his aspiration to give more attention to less matters at a given time, Mr. Leader amicably separated from Fann & Petruccelli, P.A. to create Leader & Leader, P.A. His current firm was founded and is operated with the fundamental principles of innovation, skill, experience, knowledge, aggressiveness and most importantly, personal attention to all of its clients, no matter how much is necessary for their particular matter.  Michael has been responsible for thousands of first party insurance matters since 2007 and believes he has found his calling in this arena.  As of January 1, 2019, Scott R. Zucker formally become a named partner of the firm which now operates as Leader, Leader & Zucker, PLLC.  The firm focuses most of its efforts on first party litigation representing insureds against their own insurance carriers.  Although the firm has extensive experience in many areas, property claims are the larger majority of the current practice although the firm regularly handles long term care matters and has experience in disability, life and some auto first party claims that are not related to uninsured motorist.

Mr. Leader has dedicated himself to the art of winning in the detailed and technical arena of his preferred areas of practice.  Mr. Leader spends a great deal of his time and is very passionate about representing individuals and/or entities who are confronted with underpaid or improperly denied insurance claims, insurance bad faith and other insurance related matters in property, long-term care and other areas of insurance coverage.  In addition to his firm’s extensive civil practice that he supports and personally oversees, he also routinely handles all criminal charges including serious felonies and white collar crimes in both State and Federal Court.  Mr. Leader handles non-jury trials, evidentiary hearings, violations of probation, administrative hearings and represents individuals during criminal investigations before an arrest has been made or charges have been filed in an effort to avoid an arrest/charge all together.  Likewise, Mr. Leader is regularly in Court in Miami-Dade, Broward and Palm Beach County, but is also available to represent clients in and out of the Florida in State and Federal Court. Mr. Leader and his firm are regularly consulted and retained on insurance related matters all around the State of Florida.

Michael believes strongly in giving back to the community.  He has served as the President of the B`nai B`rith Justice Unit, a Jewish Voluntary Bar Organization made up of prominent lawyers and Judges.  He still serves on the Board of Directors as a “past president”. He has served over two terms as a member of the Board of Director of the Broward County Bar Association and was appointed by the Governor as a Chair of a Florida Bar Committee related to the unlicensed practice of law, which he previously served as general member of.  Mr. Leader has had many honors and other leadership positions in his local community.  He was given a Proclamation by the Board of County Commissioners proclaiming April 13thas Michael D. Leader day in Broward County in 2008.  He has also been a member and sat on the Board of the Stephen R. Booher, American Inns of Court and donates time to Legal Aid.  He is also a member of the National College for DUI Defense.

In 2014, Mr. Leader was honored by the Broward County Bar Association with the Joseph F. Carter Professionalism Award after being nominated by a committee and voted as the most deserving recipient based upon his reputation for ethics and professionalism in the practice of law throughout his career.  This is one of the recognitions Mr. Leader is most proud of.  Also notable, Michael and his firm were recognized internationally by the ACQ5 Global Awards in 2017 as Lawyer of the Year and his firm as a Federal Criminal Defense Firm of the Year and Insurance Litigation Firm of the Year.  Mr. Leader is also proud to have been recognized as being in the Top 1% of America’s Most Honored Professionals by the American Registry.  The National Trial Lawyers organization recognized Michael as a Top 100 Civil Plaintiff Lawyer in 2017

Michael enjoys an AV Preeminent rating from Martindale-Hubbell.  Martindale-Hubbell Peer Review Ratings reflect a combination of achieving a very high general ethical standards rating and a legal ability numerical rating. The list only includes the top up and coming lawyers who have earned the trust and confidence of other lawyers, those who know their work the best. An AV rating is a significant rating accomplishment – a testament to the fact that a lawyer’s peers rank him or her at the highest level of professional excellence.  Leader, Leader & Zucker, PLLC also holds the highest level of accreditation from the Better Business Bureau of South Florida.

As you can see, Michael D. Leader has amassed profound experience, achieved incredible results and has been honored with some of the finest recognitions for his experience, skill, ability, ethics and professionalism.  Very few lawyers can master these skills in both the civil and criminal arenas, yet Mr. Leader has managed to earn such high accolades and regularly achieves great success for his clients in both arenas, just one of many accomplishments that sets him apart from the pack and demonstrates why you should want him representing you.